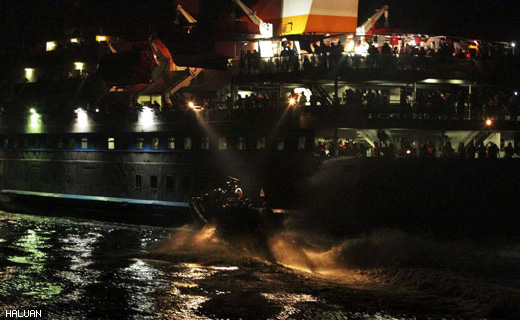 BANGI, SELANGOR, 4 Oct 2012 – The trial for Israel’s bloody attack on the Freedom Flotilla will begin its session at Çaglayan Court in Istanbul this November 6. As one of the NGOs involved in the tragedy, HALUAN Malaysia is hailed to assist in the ruling and continue the freedom-for-Palestine agenda.

Suspects of the trial will include Israel Defense Forces’ Chief of the General Staff, General Gabi Ashkenazi, Field Navy Commander, Vice Admiral Eliezer Marom, Head of Military Intelligence, Major General Amos Yadlin, and Head of Air Force Intelligence, Brig. General Avishai Levi. They will be tried as “suspects in absentia.” The trial records an astounding total of 490 plaintiffs, including activists of 37 countries on-board and families of the fallen.

May 31, 2010 marked a blood bath on humanity when the whole world witnessed the brutal attack of Israeli forces on Mavi Marmara and its sister ships on their humanitarian aid voyage to Gaza. The tragedy, which happened in international waters, involved 12 Malaysian volunteers and media officials. Nine humanitarian volunteers, all of Turkey nationality lost their lives in the air and naval strike with 50 others injured and one unconscious until today. All the captured activists were imprisoned in Israel. Some of them suffered beatings while in detention.

In a report by United Nations Human Rights Council, violations of international humanitarian law and human rights were clearly meted by the Israeli military during and after the attack. They will be tried for heavy crimes of intentional murder, torture and denial of medical treatment to the injured, intentionally causing serious suffering or injury to body or health, capture and detention without trial, seizure of personal belongings and other related heavy crimes.

Cases will be filed according to national law in Turkey, United States, Spain, Belgium and several other countries. Legal attention will also be sought at international levels under the power of the International Court of Justice and United Nations Human Rights Council.

Five HALUAN volunteers were amongst those who lived to tell the story. In honour of this NGO’s involvement, Insani Yardem Vakfi (IHH), the main organiser of the Freedom Flotilla voyage and MV Mavi Marmara ship operator has called HALUAN Malaysia to join hands in standing up for the victims of the Zionist attack and to sustain its efforts for the freedom of Palestine.

Speaking about the incident, Chairperson of HALUAN Palestine Bureau, Dr Syed Muhammad Haleem Syed Hasan stressed that the Israeli regime is now facing trial for their continuous violation of human rights and blind disrespect for humanity. “In front of the regime are victims and their families of various races, religions, nationalities and cultures – all united for the noble cause of humanity. The Zionists had not only butchered the rights of the peaceful activists onboard, but also committed serious crimes on families of victims of hundreds of countries,” he said. Dr Syed Muhammad Haleem was a medical officer onboard the Mavi Marmara.

This Turkish speaking doctor also guaranteed HALUAN Malaysia’s dedication to work with IHH and other international NGOs in exposing the bloody truth and ruthlessness of the Israeli regime. “They show no respect to the values of humanity to not only the Palestinians, but to everyone who loves peace and justice. This effort shall echo to the rational and wise, and we will support the cause to bring Israel to justice under the Turkish law,” added Dr Syed Muhammad Haleem.