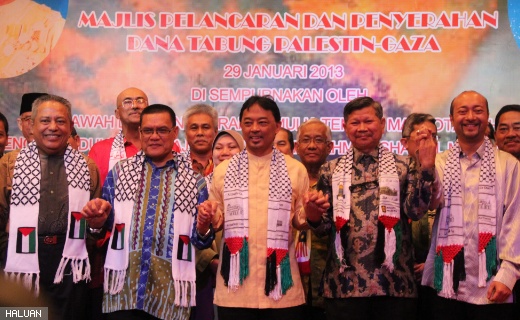 KUANTAN, 29 Jan 2013 – HRH Crown Prince of Pahang, Tengku Abdullah Al-Haj Ibni Sultan Haji Ahmad Shah graced the launching and handing over of the Palestine-Gaza Fund at the Perdana Ballroom Hall, MS Garden Hotel here. The inaugural ceremony was a brainchild of the Crown Prince to accumulate funds for the sake of Palestinians in Gaza.

Almost 70 contributors from government agencies, private companies as well as individuals stepped forward to contribute to the fund which reached almost RM1 million.The public also played their part by donating through their local mosques totallingRM117,118.

In his royal address, Tengku Abdullah expressed his appreciation and recognition towards the selfless effort of all parties including all NGOs for their dedication in helping Palestine, especially HALUAN Malaysia, PGPF and Aman Palestin.

The Crown Prince also expressed his sincerest hope that the effort in gathering donations for the Palestine-Gaza Fund could also be mobilised at the district levels in Pahang in order to sustain public awareness towards the plight of the Palestinians.

The auspicious ceremony was filled with a video presentation by PGPF as well as a Palestina Tercinta (Beloved Palestine) nasheed performance and a heartbreaking flash mob act presented by the HALUAN Siswa Club of Kolej Teknologi Darulnaim (KTD).

The video clip presentation which depicted the suffering and pain of the Palestinians stirred the hearts of the guests. Many were also emotionally overwhelmed by the energetic flash mob performance by students of KTD.

At the main lobby, a mini exhibition was held displaying projects done by HALUAN Palestine Bureau and PGPF for Palestine.

HALUAN Malaysia extends its utmost appreciation and gratitude to all donators who have channeled their contributions to it.

Dr Abdullah Sudin guarantees the channeling of these donations by the Pahang state citizens through its cooperation with the al-Sarraa Foundation, an NGO based in Gaza, for a number of short-term and long-termprojects namely the al-Huda Cancer Treatment Centre, Malaysia-Indonesia General Hospital in Gaza, Tahfiz al-Quran Cente in the refugee camps and an elementary syaria school in Deir al-Balah.

Some 700 guests were present including students of local higher learning institutions. These include 65 participants of the on-going Teen Volunteer and Self-Resilience Course organised by HALUAN in Kuantan.